Not the ‘D’ you are thinking of!

There are a few ‘D’ words out there that are not openly discussed; depression, disease, disorder, to name some.

Yet, they are a huge part of our lives. We all know someone, knew of someone, or are someone who has been a victim of any the D’s, at some point. There is nothing to be ashamed of! I know it is easier said than done, we all go through the ‘Denial’ stage of this, the self-loathing, frustration, helplessness, it is fine to feel these feelings. I think through all my years in therapy, coming to this acceptance has been somewhat pivotal. It is fine to feel what you are feeling. We move through these emotions, but sometimes get stuck in them. Then what?

Unfortunately for me, I deal with another Invisible Disease to add to alongside with my depression. I suffer from Chronic Migraines. Or as I learnt from a redditor to call it a Neurological Disorder instead, so people take you seriously and don’t try to brush it off as the terrible headache they had last week, followed by a suggestion of Tylenol 🙄.

Her name is Helga. Yes I’ve named her, feels better to hate someone on the daily, rather than just hate your brain. She’s been around for almost ten years now. Sometimes its weekly, sometimes bi-weekly, and most recently its been daily #lovelife. I won’t bore you with the symptoms I experience, just know that it is like living a daily hell, but I have found a few memes (who doesn’t love a good meme?!) to summarise it rather aptly! 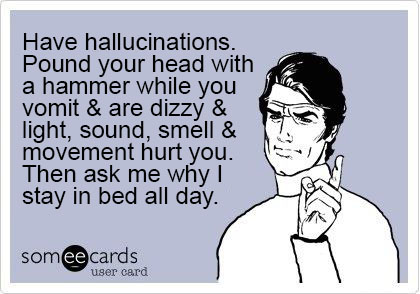 You could say I’m reaching the ‘Acceptance’ stage in dealing with these Chronic Illnesses, there is little else to do except to find a way to live a life with them, and realise most importantly that it is not your fault. Having said this, it has taken me almost 10 years 😂, and this realisation has only come in the past two months when my most recent attempt at treating Helga failed. So I joint a few online forums, reddit and a couple on Facebook too, and surprisingly, knowing that there are people out there going through the same living nightmare, is somewhat reassuring in a fucked up way. Hence sharing this brutally honest, uncensored blog of my journey. I doubt you want to sit there and read someone else whining about life, I’m sure you have your own version of a bad dream going on. But this is just a reminder that you are not alone.